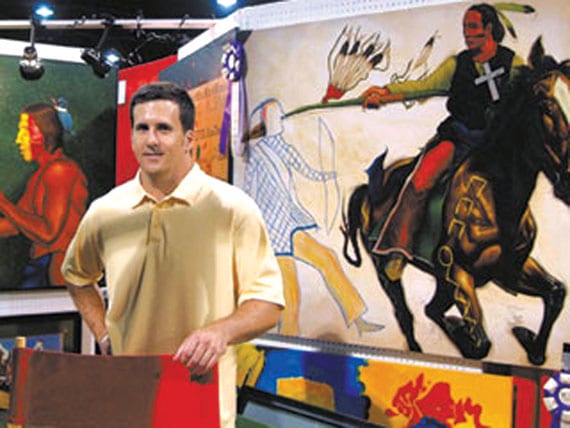 OKLAHOMA CITY – If the Red Earth Pow-Wow is a statement of multi-tribal diversity, then painter Matt Bearden is a poster boy for the cause. The Citizen Potawatomi Nation member went to school in Cherokee Country in Tahlequah, Okla. lives in Osage Country in Hominy, Okla. and paints primarily Southern Plains subjects. “You see a lot of different influences in my work.”

As the father of an 8-month-old baby boy, he has reshuffled his priorities much like he has sifted through artistic influences. As a former student of the Institute of American Indian Arts in Santa Fe, N.M., he is used to looking for things that will inspire him.

With this year’s event scheduled for Father’s Day weekend, it seems appropriate that Bearden will take his new son to the three-day event. He plans to show 10 to 15 paintings this year, like those that have earned him Red Earth Grand Award honors in the past. Right now, Bearden is working on a painting that will be in this year’s juried art show. His acrylic-based paintings take a snap shot of time around the turn of the 19th to 20th century to show an Indian struggling to fit in his assimilated surroundings.

He will pack up his work and travel the roughly 119 miles from Hominy to Oklahoma City, Okla., for this year’s Red Earth Pow-Wow. The event is slated to begin Friday, June 18 and runs through Sunday, June 20 in the Cox Convention Center.

While an Oklahoma event, the out-of-state input is strong and adds to the multi-tribal image organizers are touting. Tribal participation in this year’s event is expected to be from 100 Indian nations, organizers said. This year’s Red Earth Board of Directors named Choctaw Nation of Oklahoma Chief Greg Pyle ambassador of the year. He will be honored at a luncheon June 3 at the Skirvin Hilton Hotel in downtown Oklahoma City.

Pyle has spent 13 years as chief of the Oklahoma’s second largest tribe and, before that, 12 years as the assistant chief. He is an active education advocate and was an inductee into the 2007 Oklahoma Hall of Fame. Pyle said Red Earth brings to mind the 2004 processional of all the nation’s tribes at the opening of the National Museum of the American Indian in Washington, D.C. The use of tribal regalia authenticates the culture for the onlooker, he said. “We can all enjoy unity, heritage, peace among the music of the drum,” Pyle said. “I hope thousands. … come to OKC to share this experience with us.”

Gordon Yellowman Sr., of the Cheyenne & Arapaho Tribes, was named the 2010 Red Earth Honored One. Yellowman was noted for his tribal, familial and community leadership. Yellowman follows some 29 Indian artists recognized as a Red Earth Honored One over the years, including potter Jereldine Redcorn, sculptor Allan Houser, painter Archie Blackowl, doll maker Mildred Cleghorn, and artist Doc Tate Nevaquaya, among others.

As a central pow-wow event, Red Earth is celebrating two decades of annual Indian fellowship and was named Oklahoma’s outstanding tourism event by the Oklahoma Tourism Department in 2009, attracting more than 25,000 attendees, said Eric Oesch, Red Earth deputy director. Local Oklahoma City officials estimate the pow-wow alone will have a $3.3 million economic impact. The pow-wow’s sustainability makes it a yearly draw for families. “The Red Earth Festival is one of the most, if not the most, respected event of its type,” said Mike Carrier, Oklahoma City Convention & Visitors’ Bureau president.

From across Indian country various participants are set to display their woodworks, sculpture, painting, jewelry and regalia with more than 200 registered artists and vendors. Art chosen for competition is selected from a juried art show, which organizers said ensures the quality of work on display.

The annual dance is not without its changes. Red Earth, once held at the former Myriad Convention Center (now the Cox Center) in Oklahoma City, changed scenery for a couple of years. At one point, the event was moved to the Oklahoma State Fairgrounds but soon returned to the original venue in downtown Oklahoma City.

For the health-conscious, a 5K run and 2K fun walk are scheduled for June 19 in Regatta Park and River Trails along the Oklahoma River in downtown Oklahoma City. The race is open to all ages and begins at 8 a.m. Registration starts at 7 a.m with a $25 adult and a $20 student registration fee. Sanctioned by the USA Track and Field Association, the Red Earth Run offers electronic chip timing for participating runners. In 2009, more than 300 runners took part, officials said.

Meanwhile, as Bearden counts down the days until the start of Red Earth, he plans to shave off some alone time to finish a new piece. “It’s all good, but a baby can zap into your painting time. There are tons of people who come through Red Earth and if you do arts in Oklahoma, it’s a good place to be.”