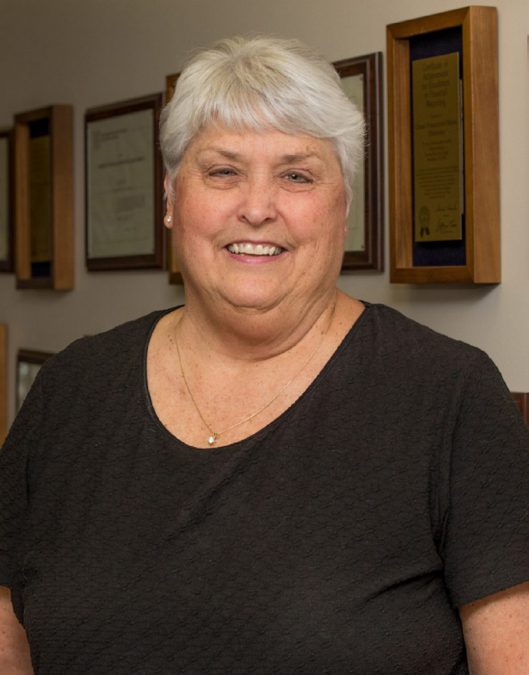 When longtime Tribal Chairman John “Rocky” Barrett discusses his tenure at the tribe, first as tribal administrator and then as tribal chairman, he often mentions the decrepit state of the Nation’s finances when he began working at the tribe in the 1980s. Appointed as tribal administrator in 1983, he came to work to find a startling lack of financial records, which resulted in Citizen Potawatomi Nation’s federal grant funds being suspended for a time.

Today, CPN has an economic impact in excess of $500 million, with more than 50 public programs and commercial enterprises employing more than 2,300 Oklahomans. Helping the tribe develop from those dark days in the 1980s, Barrett often credits the accounting department under longtime director Susan Blair for helping right the ship.

Born and raised in Norman, Oklahoma, Blair earned an undergraduate degree in psychology at what was then known as North Texas State University. One doesn’t often find individuals with a long career of accounting and number crunching ahead of them with a psychology degree, but Blair said her interest in people drew her to the academic field.

“I thought it was interesting, so that’s what I did,” said Blair, who had moved to the Dallas, Texas area with her new husband at the time.

She eventually returned to her hometown of Norman and worked as a sales representative for a local pharmaceutical company, but found herself facing a conundrum after the business merged with another firm. Weighing a choice between losing her job and having to relocate to another state, her boss offered her some sage advice.

“He said, ‘I think you should go back to school and get an accounting degree. I think you’d be good at that,’” she reminisced.

Blair, who wasn’t in charge of financial or bookkeeping responsibilities at the time, said her boss explained that his daughter was earning her CPA and thought Blair should, too. She went back to school part-time at the University of Oklahoma while she raised her daughter, and secured her CPA certificate in 1986. In 1987, she began working at Citizen Potawatomi Nation.

Blair came to CPN through the services of a temp agency, recalling that her intention was to work for the tribe while waiting on another position to open closer to her home in Norman.

Three decades later, she still makes the daily commute along State Highway 9 to and from Norman.

“This has been the most interesting job I have ever had,” she said, then laughed.

Blair and another accountant joined the tribe amid a challenging time for the Nation as its administration set to reconstitute proper accounting and bookkeeping practices. Its federal funding had been suspended for lack of these, while financial records for its FireLake Golf Course, convenience store and tribal museum were in various states of disarray. Within a few weeks of joining as a temp, Blair was appointed the director of enterprise finance.

The uniqueness of the job was apparent from the day the temp agency first sent her to interview for the position.

“I was interviewed by the then tribal administrator, Francis Levier, and he asked me what I would do if somebody shot at me,” Blair recalled.

Not driven off by such a question, Blair found herself with a group of tribal administrators and police officers who seized the tribe’s bingo hall from the control of an outside firm suspected of mismanaging its revenues and operations just a few months into her tenure.

“I remember I had to come in really early that morning from Norman and it was really, really foggy,” she said. “I went into the bingo hall behind the police department.”

The head of tribal accounting said that her longevity is due to the support of CPN administration. She also credits the distinctive nature of the job when it comes to working as an accountant for an Indian tribe. Tribal nations are distinct government entities and commercial enterprise operators.

“There’s always something different; it’s not like we go in every day and do the same thing over and over again,” she said. “It’s like ‘OK, today we’re going to open a bowling center, and then tomorrow we’re going to run a grocery store and then we’re going to have a radio station.’ But then you have to ask yourself, ‘Alright, how are you going to account for each one of these different operations?’ Because they’re all slightly unique in what they do.”

Blair’s tenure helped shape and then lead the development of its 30-person accounting staff. The growth of the department is a reflection of tribe’s growth in employment numbers, federal grant funds utilized and new commercial enterprises. However, the most present physical reminder might be the department’s hallway, where more than two-dozen accounting award plaques hang.

The department is regularly recognized by the Government Finance Officers Association of the United States and Canada, having earned excellence in financial reporting awards for 28 consecutive years.

She said the support of tribal administration in purchasing the most up-to-date accounting software and being able to hire the best candidate for each job is integral to her department’s success.

Though that diversity makes the job interesting, Blair admitted that the tribe’s unique legal status as a dependent sovereign nation makes their work challenging sometimes.

Given her time with the tribe, she has seen these challenges arise over time given the lack of understanding about the capacity of tribes to manage their financial affairs. She recalled the herculean efforts to build FireLake Discount Foods in the early 2000s. Because tribal nation land is held in trust by the United States government, they cannot leverage their assets to secure a mortgage. Blair also heard from potential lenders who expressed a lack of confidence in tribal-run enterprises.

“They just didn’t have any faith that an Indian tribe would pay their bills, and that if they didn’t pay, the tribe would say ‘You can’t sue me, I’m a sovereign nation,’” she said. “Most banks were really standoffish.”

CPN paid the construction and startup costs of FireLake Discount Foods with cash. Blair recalled tribal leaders and accounting staff “scraping the bottom of the barrel” to find funds to complete the project.

Helping shape that transaction and seeing it succeed, Blair noted it was a turning point in her career with the tribe in demonstrating what a viable, reliable partner the Nation could be.

“Now though, we have people competing for our business,” she said.