A traditional birchbark basket with stitching, created by artist Pat Kruse, on display at the Minnesota Historical Society as part of its 2017 Native American Artist-in-Residence Program. Photo provided

A traditional birchbark basket with stitching, created by artist Pat Kruse, on display at the Minnesota Historical Society as part of its 2017 Native American Artist-in-Residence Program. Photo provided

Ojibwe birchbark artist Pat Kruse thinks about every aspect of a piece of art while he makes it — the trunk of the tree, the color the wood, time-honored traditions, future generations and global appreciation for Native artwork.

“I’ve been teaching and doing this off and on for quite a long time — 20 years, I suppose, or better,” he said. However, Kruse still considers himself a novice. “I’m like an infant; I’m just starting to get to that birchbark.”

He considers it a skill that takes a lifetime to build and no one can ever quite perfect. For centuries, the Ojibwe, including Potawatomi, have developed a relationship with and an understanding of nature to make durable necessities and breathtaking art from the flexible wood of birch trees.

“It’s an excellent, excellent tool for everything survival. Drinking cups. You can cook out of it. So amazing,” Kruse said. “In the old style, they have some of the finest storage containers for carrying wild rice, maple candy. … I have fine containers, old winnowing trays.”

Perhaps the best-known birchbark item is a canoe Native Americans used to navigate rivers while fishing and collecting wild rice in the Great Lakes region before European contact. Few people make such canoes now, but Kruse is attempting to revive other, more artistic traditions.

He mainly creates elaborate baskets and paintings with birchbark. 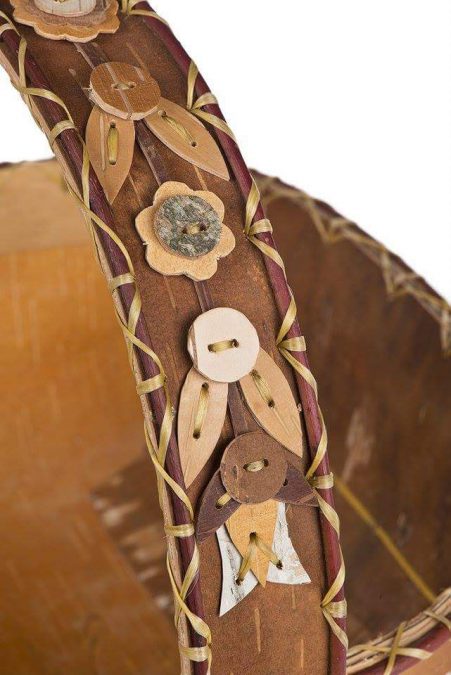 Handle detail of a traditional birchbark basket made by artist Pat Kruse, on display at the Minnesota Historical Society as part of its 2017 Native American Artist-in-Residence Program. Photo provided

“It’s an honor and a privilege to do these nicer baskets because now we get to feel how hard it actually was for them that came before us,” Kruse said. “When you make a basket like they made, you find out that, ‘Wow, these people were very strong and they didn’t care about time. The tick-tock of the clock wasn’t even important.’”

Kruse began developing his skills as a young man. He learned by asking a myriad of questions.

“It was advice from elders and other people like that that helped me to become better at my art,” he said. “There was a canoe maker in the
area that we used to bother when I was a kid, but I learned from numerous people,” including family, other artists and cultural teachers
on the reservation.

Kruse now takes care of his mother. He also teaches his son how to create birchbark art.

“My ma told me, ‘You know, they used to make flower items and these finer baskets a long time ago. You should start making your stuff like that instead of plain because everybody makes plain stuff,’” he reminisced.

He aims to redefine working with birchbark from a necessity to an art form by focusing on more traditional styles of working with the wood. Using historic patterns and designs for baskets, hats and other household goods expands the possibilities of “one of the oldest canvases in North America,” Kruse said. It is also a huge time investment.

“I can practically feel our ancestors smiling down upon us because we actually took the time to go through that process,” he said. “Every waking hour, pretty much. I do birchbark all the time.”

Kruse spends his days creating baskets with elaborate floral designs using all shades, shapes and sizes of bark pieces as well as intricate stitching. Each smaller piece is carefully selected, crafted and worked into the final composition. Making one from scratch is a mixture of nature and skill as he seeks out the materials and shapes them.

The same is true with his birchbark paintings. The concept of wood paintings may seem counterintuitive due to the absence of paint itself, but they are made the same way on a flat surface and are often even more involved than his baskets.

Through his art, Kruse circumvents the idea that Indigenous people “didn’t have structure and class and all that — it was actually the opposite. Native Americans had quite extensive ideas on medicine, artwork, everything,” he said.

He has transformed his passion into a full-time job. He enjoys being his own boss and working on his own schedule.

“On the reservation, it isn’t like somebody’s coming to save you. You have to save yourself,” he said. “I do the birchbark to save me. It’s not out of desperation, believe me.”

After working in construction full time for years, he also appreciates the physicality of working with the medium.

“The way I do birchbark and the things I make is actually equal to working one of the hardest jobs. If you ever had to grab one of my paintings or my picture pieces, you’d say, ‘Holy cow! This is heavy,’ Kruse said.

Collecting bark is one of the most demanding parts of the process, which involves heading into the forest with this 22-year-old son Gage. Kruse often meets landowners that allow them to collect wood on their land.

“I do my best to give them artwork for their birchbark. So, it works out pretty good for me like that because these people are not Natives that give me their trees,” he said. “I wouldn’t want somebody who’s going to collect for me anyway because I kind of need to have the right kind of birchbark. I can’t have just any old birchbark. I have to have the really pure white stuff for the fancier things and the rougher stuff for the flat products like the picture frames I make.”

Kruse often thinks about his Ojibwe ancestors while gathering bark for upcoming projects, including the importance they placed on respecting nature.

“They say life’s a circle, so even the scraps — we don’t waste nothing, and we try to make sure we use it up to the absolute because there’s a risk when you work with nature,” he said. “You can’t just take from nature and not use it.”

Kruse has been teaching his son since Gage since he was six years old and considers it one of the “greatest treasures” of his life.

“I have very proud father moments when I see all the things that we have made together since he started working with me,” he said. Kruse enjoys seeing his son become adept with birchbark at such a young age.

Kruse also teaches his nephews, elders and other artists. Kruse said he feels a responsibility to pass along skills and traditions to the next generation.

He has received recognition for his efforts and has sent his artwork around the world.

“When you think you can’t get nowhere from a res, that’s actually not true,” he said. “You can actually go across the world without ever leaving the reservation.”

The Minnesota Historical Society selected him for its 2017 Native American Artist-in-Residence Program and displayed his work in the Renewing What They Gave Us exhibit at the Minnesota History Center. He and his friend William Schaaf also received a 2005 Cultural Community Partnership grant from the Minnesota State Arts Board to collaborate.

“I got lucky to be honored by getting grants to help me to keep doing my art,” he said.

Kruse’s works also are displayed at the Plains Art Museum in Fargo, the Tweed Museum of Art at the University of Minnesota and the Science Museum of Minnesota in St. Paul.

“One of the biggest pieces I have is at the science museum,” he said. “It’s an eight-foot-tall painting — giant flower with hummingbirds, bees, butterflies and everything.”

Kruse is adding to his skills by learning quillwork, another traditional Ojibwe art form that uses porcupine quills as embellishment on clothes and a variety of other items. He thrives on the learning process.

“We went through all that trouble of learning and failing so many times, and then you get that one little bit of success — pretty much a miracle,” he said. “As it turns out, I’m one of the luckiest people on the planet.”