Beginning of the end of Citizen Potawatomi displacement

In the mid to late 1800s, profitable steam locomotion companies began purchasing large tracts of land in the Midwest. The Atchison, Topeka and Santa Fe Railway, chartered in February 1859, wanted to connect Chicago and the West Coast. Upon Kansas’ statehood in January 1861, the company eyed Potawatomi reservation land to complete its railway project. In November of that year, the Potawatomi signed a treaty with the federal government that divided the Tribe’s reservation into allotments and outlined a rough path to becoming an American citizen.

“The ‘61 treaty was very much sold to us as the alternative to being moved again,” said Cultural Heritage Center Director Kelli Mosteller. “If you look at the letters tribal members are sending to each other and to their Indian agent and different people within the government, you could tell that they’re being told, ‘If you don’t do this, we can’t promise that you’re not going to get moved again.’”

The Tribe transitioned from owning land communally to individually, a previously unexplored way of life for the Potawatomi. Two-thirds agreed to own a divided portion for their individual families and became the Citizen Potawatomi. Allotment pieces ranged in size depending on a person’s status such as a head of household or a minor. The remaining third kept a communal parcel and became the Prairie Band.

“Thirty years (before), we were back in the Great Lakes. The Indian Removal Act had just been passed. We were just coming off the heels of the War of 1812,” Mosteller said. “That much change in such a short period turns a group’s understanding of their place in the world upside down.” 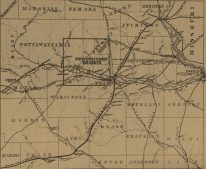 The treaty outlined an incomplete procedure to obtain U.S. citizenship. The government conducted a census to acquire the age and overall number of people who agreed to allotments. After a land survey, Citizen Potawatomi picked their plots from a grid. Heads of households chose 160-acre plots.

Becoming landowners somewhat legitimized Tribal members in the eyes of the government, but it still labeled Native Americans wards of the United States at that time. Citizenship required the support and verification of competency from a Bureau of Indian Affairs Indian agent.

“In 1861, what does it mean to be a Native American and a U.S. citizen? Absolutely no one knows. This is 25 years before (The Dawes Act). No one knows what this legal status is. It’s very gray,” Mosteller said. “In a lot of ways, people had the burdens of citizenship without the true protections of citizenship.”

The treaty outlined recompense in the form of annuity payments, farm equipment and seeds to help allotment owners become farmers. It also delineated the land ineligible for levy, taxation or sale until the patent holder was a U.S. citizen, which often took years. However, the obligations remained unmet, and the government began collecting taxes almost immediately.

“A lot of people started defaulting on taxes and lost their now private land to the government, who then in turn basically sold it just like you do now if somebody doesn’t pay their taxes, and it’s taken,” Mosteller said. “What they were doing was selling it to the railroads.”

The Treaty of 1861 included a provision Mosteller refers to as “an escape clause” that provided the assistance of the Secretary of the Interior while buying or selling land to anyone leaving Kansas to find somewhere else to live later. The government originally intended for it to apply to the third who remained in communal living and not those who opted for allotments.

“What they should have been prepared for was the fact that it was the reverse,” Mosteller said. “The Prairie Potawatomi held steady. Their lives were of a similar condition to what they were before the treaty. They did not have this great upheaval. They were continuing on a much-diminished reservation, but they were continuing to live in a way that they had before the treaty happened.”

The government and the railroad saw the situation as an opportunity to buy back land. The railroad needed the same riverside sections, heavy with timber, which made up allotments for steam locomotion. The Treaty of 1867 certified the purchase of allotments and surplus lands in exchange for approximately $150,000. The Potawatomi used the funds to acquire a reservation in Indian Territory, and the government sold the Kansas allotments to the railroad.

The 1867 treaty allocated no money for resettlement — the Citizen Potawatomi paid for it themselves. The long and dangerous trip meant they spent about five years preparing to move again, the third time in less than 50 years. They saved money, sold possessions, planned logistics, sent members to scout the area and waited for favorable conditions.

“It was not something that you could just hop in a wagon and off you go. Most of you didn’t have a wagon,” Mosteller said. “When people did come down, they tended to come down as multiple family groups. There was safety in numbers. You could share supplies. It just made the move easier.”

Over the next 20 years, families and individuals made their way from Kansas to what is now central Oklahoma in spurts. Moving to frontier territory presented its own set of challenges including establishing infrastructure and building homes.

Many impoverished Potawatomi remained in Kansas, living with friends and family. On the other end of the spectrum, the wealthy members remained where they experienced success. The idea of beginning a new life in a new place generally appealed to Tribal members somewhere in the middle of these two groups. The two treaties resulted in the name “Citizen Potawatomi” and movement of Tribal members to the area headquarters are located today. It is an important piece of Tribal history, but Mosteller believes deeper connections persist.

“It is our origin story, but then again, it’s not. I don’t want people to act as though we didn’t exist as the people we are before. Yes, it changed a lot of things… but there was a continuity, too,” she said. “It wasn’t like we flipped a switch, and all of a sudden we’re a whole new people.”