Vaccinate your way to a healthy heart 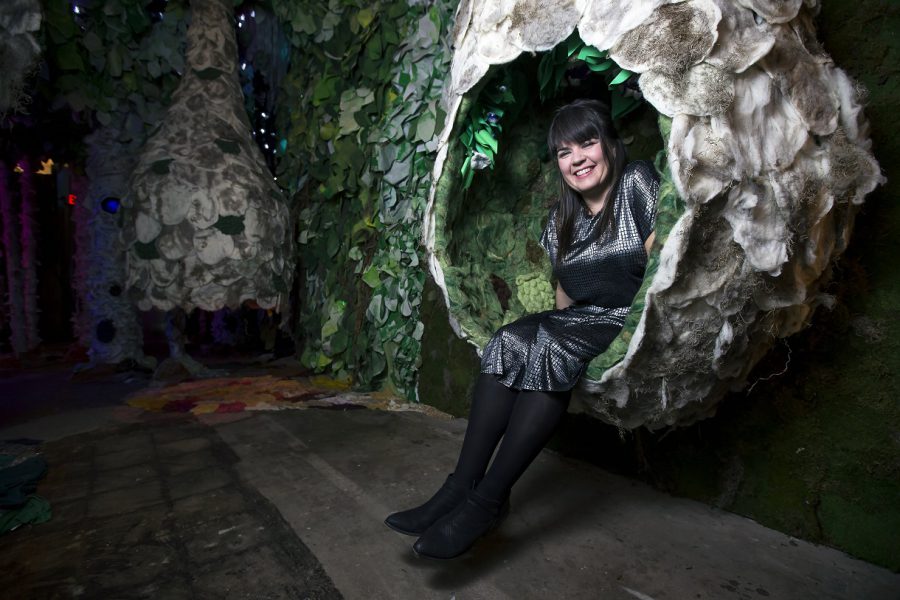 Nicole Emmons-Willis swings in a handmade forest pod at Factory Obscura’s SHIFT exhibit at Current Studio in Oklahoma City. The immersive art installation has drawn more than 5,000 guests since it opened in November.

She stood on a white-painted step, nestled into a softly blinking cocoon of cottony clouds as she described the exhibit. Her steel-hued dress glittered as she turned, explaining the surreal art exhibit to guests as they walked through it.

“All of these pieces of felt were handcrafted for the exhibit, and everything was hand-knitted specifically for the show,” said Factory Obscura artist Nicole Emmons-Willis. She ran her fingers down a wall decorated with real moss. “There are dioramas, and all these different trees have little critters and little bugs having fun.”

Everything is rich with texture and detail. As one enters the sea, coral crafted from neon pipe cleaners and knitted flora and fauna calmly float over the recorded ambiance of surf rumbling onto a beach. The ethereal voice of Mister Rogers explains scuba diving.

“It’s important to me to have magical and immersive experiences for people,” Emmons-Willis said. “I also would like to create thought-provoking experiences.”

SHIFT certainly does both. More than 5,000 visitors of all ages have experienced the interactive, immersive exhibit since it opened in November.

“The opportunity to work with others to create something really beautiful was really exciting to me,” she said. “Also, because this is not motivated by money at all or any corporate interests or consumerism of any sort.”

Admission is free, and the exhibit runs through February at Current Studio in Oklahoma City.

‘We’re always reaching for the stars’

Emmons-Willis created two tower-like pieces for SHIFT. She explained them, and the exhibit, during a recent interview with the Hownikan.

“If you come in here, the wind from the wind turbines is coming into the tower, and the birds are flying over the landscape,” she said as she ducked inside Tower One. Inspired by Oklahoma’s landscape, inside the cylindrical metal structure, a high-power fan and a handmade lantern cast miniature silhouettes in a panoramic diorama depicting in-flight birds of prey juxtaposed with monolithic wind turbines.

“The whole wind turbine area is inspired by the stretch of I-35 when you go to Turner Falls,” she said. “When I was growing up, that was a really beautiful area, the Arbuckles, and now there are all these wind turbines, and I’m not sure how I feel about it.

“Wind turbines are great — it’s mankind trying to find alternative ways to get energy,” she added. “However, a lot of times we put them in the migratory pathways of birds, and we destroy — hundreds of thousands of birds are killed every year.”

Tower Two, a rocket ship, transports guests to the cosmos, representing “how we’re always reaching for the stars in everything that we do,” she said. Inside is a six-screen installation with images representing humanity’s aspirations of flight and space travel.

Her favorite image is indeed an iconic one — an “Earthrise” view captured from the moon’s surface. She briefly paused as she listened to the sounds inside the ship, and then added, “That’s the actual sound from the Apollo 11 when they touched down on the moon. It’s pretty cool.”

Emmons-Willis said the collaborative SHIFT project is about “creating something really beautiful for the community that we could share, and creating a fantastical environment for people to come and get away from their everyday concerns — let people have a little piece of magic in their lives.” The tick-tock of passing time is heard as guests enter a sculpted head, its brain webbed with neurons as thoughts are created. It’s part of the Factory Obscura collective’s SHIFT exhibit, now open at Current Studio in Oklahoma City.

‘I’ve always been an artist’

One of her earliest memories of creative accomplishment is winning a cookbook cover design contest in first grade.

“I think I’ve always been an artist since I was a little kid,” she said.

With the help of a Citizen Potawatomi Nation tribal member scholarship, she earned her bachelor’s degree in animation and film at Columbia College Chicago in Illinois, before heading out to New York to find work.

“I worked on all kinds of sets and all kinds of projects, a lot of videos, low-budget features, some TV, infomercials, everything — you name it — music videos and stuff,” she said. After a couple of years, “I decided after a while that I wasn’t staying true to my real love, which was stop-motion filmmaking … so I decided to go to grad school, and then I moved to L.A.”

She applied for and received a Jacob K. Javits Program fellowship, provided by the U.S. Department of Education, and was accepted to California Institute for the Arts in Valencia, California, where she earned her master’s degree.

In 2014, she moved back to her home state of Oklahoma, where she quickly engrossed herself in Oklahoma City’s vibrant artist community. She eventually met Current Studio co-founders Romy Owens and Kelsey Karper. In 2016, the pair invited Emmons-Willis to become the new venue’s first artist-in-residence. She created Domesti City, OK, a study of 1970s-era women, gender roles, nostalgia, escapism and relationships told via stop-motion animation in miniature cinematic scenes.

“I really enjoy stop motion because it incorporates all kinds of art. You can do sculpture, drawings, storytelling — just the artistry of filmmaking,” Emmons-Willis explained. “I really enjoy directing and just creating my own world that I can bring to life.”

Additionally, Emmons-Willis is Current Studio’s featured Art of the Month Club artist for February. Subscribers receive an original work created by a different featured artist each month. She hinted that her pieces relate to the themes of her Domesti City, OK installation. Subscription information is available online at currentstudio.org/art-of-the-month.

She also teaches community courses at Oklahoma City Museum of Art as an adjunct faculty member. Emmons-Willis also works with Oklahoma City Contemporary Art Center and leads workshops and classes in various schools and colleges when she can.

“I enjoy being a part of the creative process with others. I enjoy encouraging them to find their own voice,” she said. “My favorite thing is to work with young artists and pull that magical piece out of them — to pull whatever is in their heart out of them and give them the tools and the support and the confidence to be able to make something on their own. So, I love teaching. It’s really important to me, and it’s really fulfilling.

The new year brings with it plenty of opportunities,” she said. There are excited whispers of possible projects with a major movie studio and the Oklahoma production company Reckless Abandonment Pictures.

“As I’ve grown older, my heritage has really become increasingly important to me,” Emmons-Willis added. “One thing I would really like to do is get involved telling these Native stories, using the skills that I have gained over my lifetime to really tell some stories of the people that are already here.”

As a descendent of the Melot, Vieux and Navarre families, Emmons-Willis said she aspires to connect with more CPN tribal members and help share the Nation’s accomplishments and promote its rich oral history.

“I want to tell fun stories and get people to know about all the richness of Native culture; things that focus on the value of human life over money — valuing all of our animals, all of our land. … I’d like to do things for little kids — puppet shows, animation, features for children, really all ages.” Nicole Emmons-Willis swings in a handmade forest pod at Factory Obscura’s SHIFT exhibit at Current Studio in Oklahoma City. The immersive art installation has drawn more than 5,000 guests since it opened in November.