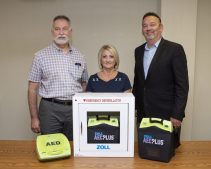 An AED device is a transportable machine that restores an individual’s heart rhythm by sending an electric shock through the chest. These portable devices have the potential to save lives. According to the Oklahoma State Department of Health, heart disease is the leading cause of death in Oklahoma, accounting for nearly 1 in 4 deaths. Additionally, Dr. Edward Martin from the Oklahoma Heart Institute said 2009 data ranked Oklahoma as No. 3 in the nation for cardiovascular-related deaths.

“It gives us good opportunity — something that we didn’t have in place before, something we really didn’t have the money for, but it really makes our schools safer,” said Shawnee Public Schools’ PR and Communications Coordinator Brittany Watts.

La Rita Haffey, district nurse health coordinator, holds a master’s degree in nursing and is a registered nurse. She uses her skills and knowledge to ensure the safety of students, staff and visitors.

“Providing AEDs in our school district can more than double a victim’s chance of survival with early defibrillation,” Haffey said. “Only half of sudden cardiac arrest victims will initially need a shock, but all require high-quality CPR.”

She said Oklahoma is one of the leaders in AED awareness. In 2008, the Zachary Eckles and Luke Davis Automated External Defibrillators in Schools Act passed. The legislation came about after two young boys died because they did not receive an AED’s life-saving electric shock and urges federal and donated funding to purchase these devices.

“If something were to happen, we can respond immediately, and we don’t have to wait necessarily on emergency vehicles — we can go ahead and get help to them,” Watts said.

However, these powerful devices do more than deliver an electric shock.

“The technology of the AEDs provides real-time feedback on rate and depth of chest compressions and supports rescuers with integrated text, voice and visual prompts until emergency services arrives,” Haffey said.

Shawnee Public Schools provided $20,000 to fund this project along with $10,000 in outside funding.

“It definitely wouldn’t be something that we could just do on our own,” Watts said. “It is very important to us, and we appreciate it.”

All Shawnee Public School staff will receive CPR and AED training at the beginning of the 2018-2019 school year.