Three days doesn’t sound like a long time, but when waiting on new GPS telemetry data from Wadase Zhabwe those days seem like weeks. We want to thank tribal members, employees, and anyone else in the area who has been following her progress and those that have seen her and reported sightings. Actual sightings are crucial as those reports help us to better understand her habits and tendencies and her overall wellbeing. We simply can’t be everywhere at once and the extra eyes looking are greatly appreciated especially when those sightings come between GPS data downloads.

Wadase had seemed pretty content in the marshy area east of the CPN and with a diverse and plentiful prey base we suspected she would spend a great deal of time there. On the 26th of April, we spotted her on the ground near the swamp in the open field and she appeared to be eating.

Later that day it looked as if she had made new friends of sorts. She was flying with a group of young Turkey Vultures, chasing them in and out of the swamp. We had no positive sighting of her after the 26th and we waited anxiously for new GPS data as we continue to track her progress and monitor her hunting abilities.

When new GPS came in, it was no wonder we couldn’t spot her near the swamp, she had returned to the river further east of the Aviary. We were looking in the wrong direction. It seems she is making the rounds to bless all of the local CPN projects because the April 30th GPS showed the Iron Horse Bridge as her newest location to visit.

Once we got down to the site on May 1st, we noticed the river had gone back down significantly from the recent rains and we hoped she might have a better chance of fishing there in the wide bend of the river. Walking the banks of the river looking for evidence of her fishing, we spotted eagle tracks in the wet sand, but no sight of her. Trying not to be too intrusive we went back to the tree line on the pastures edge and waited, and waited, without any luck.

However, Friday, May 3rd, when Jason Greenwalt and Kelli Mosteller went to the Iron Horse Bridge to look at the site as its nearing completion, they spotted her flying over the river. With GPS coming in that day, we know she was on the move; she went further down the river and then returned to her swamp. Perhaps she is able to find food easier in the swamp, as young eagle, her survival depends on good instincts, finding food and returning to those places where she had success catching prey and it seems she is doing just that.

The following Monday on the 6th, Blaine Littleton, spotted her in the pecan grove not far from the swamp, however she was chased west from the area towards the CPN Golf Course by territorial nesting Red-Tailed Hawks. While she isn’t a threat to the Red-Tails, they apparently do not want to share their squirrels that live amidst the pecan trees. Not having personally seen her since the April 26th, we were excited to learn from the GPS that she was just east of the Aviary in the adjacent pasture on the May 9.

Knowing she was in the area, we left food on the release platform in hopes she might return.  We searched the tree lines and fields with a spotting scope and binoculars throughout the day but had no luck. The following morning we kept an eye out for her but saw only Turkey Vultures.

However, when we returned to the Aviary from lunch we had a guest who had come to eat while we were gone. Almost a month since her release, Wadase had come back to the Aviary. The food on the platform was gone. She was sitting near the base of a huge pecan tree in the shade in the front of the Aviary. We offered her more food on the release platform and she seemed interested, but hesitant. Once she felt safe and we were back in the office to observe her she went to the platform. After eating she made her way to Squirrel Creek where she roosted on a low limb that hung just over the edge of the creek.

At sunup on Saturday the 11th, she was already gone from her roosting spot and out of sight. However, she was promptly back at noon for lunch. This type of “soft release” is exactly what we had hoped for to give her every opportunity to learn the skills needed to survive in the wild while getting some support to stay healthy and thrive. Eventually she will leave the “nest” for good but for now we are content to give her the added support when she comes for a visit.

Mother’s Day will go on the list as one of the most incredible days that we have had here at the Aviary. Early that morning, Wadase was sitting out back behind the Aviary near the prayer circle. I think she may have been chasing the young squirrels that have just begun to leave the old hollow pecan tree in the yard because the noise from the chattering squirrels made it nearly impossible to hear anything else. As the sun made its way to the back yard the perch she had chosen was in the sun she finally ceded the perch to the local Mocking Bird that had started to make swipes at her, refusing to have her in his yard.

She went back to the platform around front to eat. As if the day was not full enough, she made her way down to the frames of the wigwams at the edge of the aviary pasture and perched right on top. She spent the rest of the afternoon there, sleeping, preening (even preening her telemetry antenna) and fussing at the occasional crow that came in to give her a hard time.

At dusk she was still there, one foot up, head tucked under a wing, sleeping. That brings us all the way to Monday the 13th. At 6:00am the pasture was still and quiet but she had already left the wigwam frame she chose as a roost. Scattered out across the Aviary’s open pasture were more than a dozen deer grazing and stirring about as the resident turkeys were walking down the drive towards the river, and young bobcats were roaming the edge of the pasture weaving in and out of the tall grass. Not a half hour later she arrived for breakfast. After eating she decided to try out the second wigwam framework as a perch. Curious about everything she walked back and forth across the horizontal framework and bit curiously at the ties where the frame is joined together.

As I am finishing this the Oklahoma winds have woken up as well and her Turkey Vulture friends are circling about, diving from just above the tree top almost to the ground. They seem to encourage her to fly, as she bats her wings with the incoming gust of wind, she remains, for now she seems content to stay perched there. For now we are content she is perched there as well.

Wadase leaves the platform at the CPN Aviary

Wadase picks up the food left out by CPN Aviary staff

Wadase preens the antenna from the GPS device 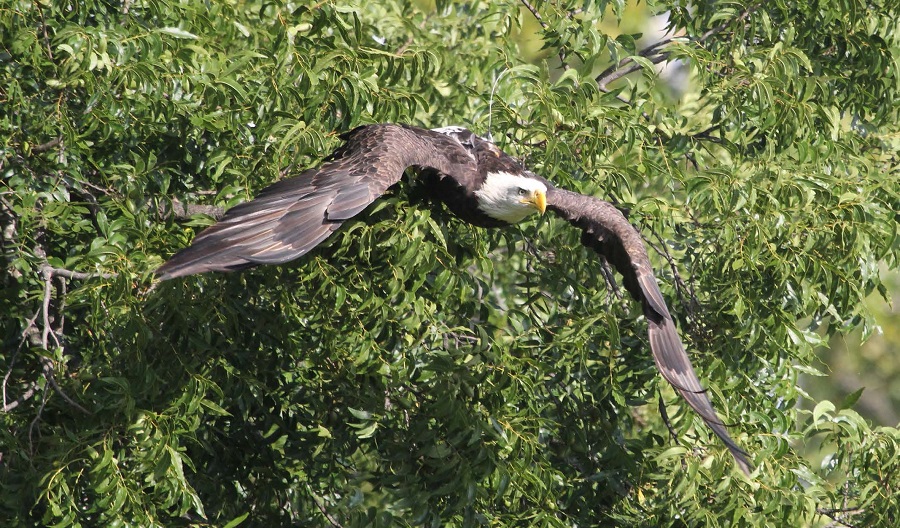