Andy Arrasmith painting an actor for a show. 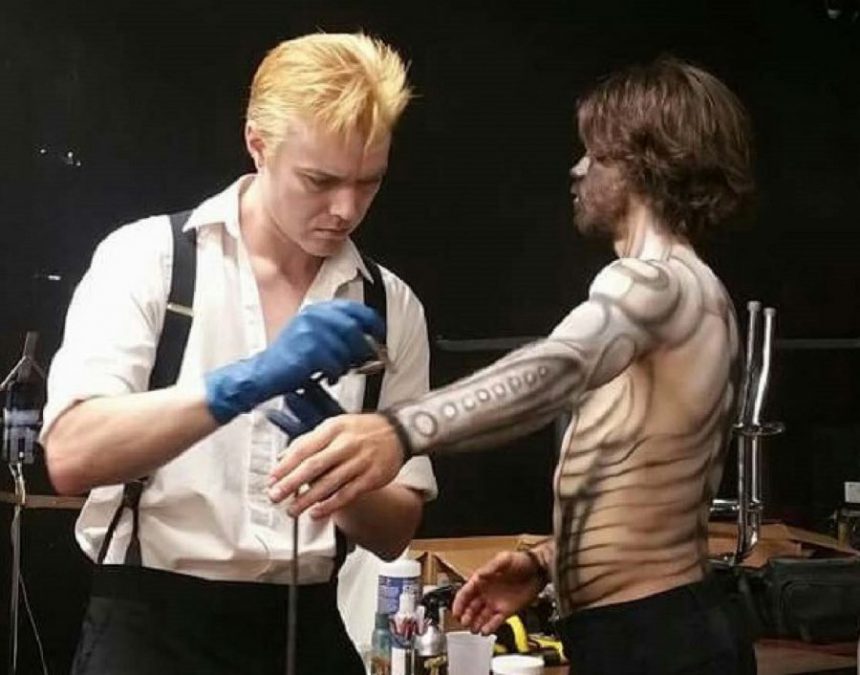 Andy Arrasmith painting an actor for a show.

Monsters, zombies, ghouls or goblins, whatever you are afraid of…this Citizen Potawatomi tribal member can bring it to life. Andy Arrasmith has been a special effects makeup artist in film and television since 2012 and stays busy with projects ranging from theme park commercials to independent films.

“I was influenced creatively by my grandmother on my father’s side of the family, what we’ve come to call ‘the Indian side.’ She always encouraged me when it came to art and would sometimes get onto my cousins to let me be myself,” Arrasmith said.

Arrasmith is from the Bostick family and says he wasn’t very involved or in touch with his native heritage until he started getting older and becoming aware of it.

“I did receive encouragement from my family to learn more about my native roots,” he said.

Arrasmith lives in Denton, Texas, but attended art school at the Savannah College of Art and Design where he studied painting and found his “niche” in the theatre business. In the mid-2000s he started helping with short films and background acting for features to absorb as much as he could about the craft.

“I always loved the monster films of the 1980s and 1990s, something that concerned my mother, but the fascination was with the magic that happened onscreen. I always wondered how they brought those illusions to life,” Arrasmith said.

Arrasmith became a father in 2012 and decided to concentrate on his makeup art techniques shortly after.

“Through a lot of trial and error I became pretty good at it, good enough to land an assistant makeup position on a science fiction film in Dallas,” Arrasmith said.

Soon after that, he had the opportunity to do make up for a Six Flags Fright Fest commercial and it’s been “one film gig after another since then,” according to Arrasmith.

“With smaller budget independent films, you have to innovate and be quick to make something convincing with limited time and resources,” Arrasmith said.

Although his work can be challenging, he said that it all pays off in the end.

“It’s a kind of magic that not everyone understands the mechanics of,but when it happens on screen and becomes part of the story, and it might be just a second or two of something you worked weeks on, it’s worth it to see the audience be captivated by it,” Arrasmith said.

However, he says that the local film industry in Dallas seems to be dwindling.

“We used to have excellent tax incentives for films being shot on location in Texas, but those have been cut and might soon disappear,” Arrasmith said.

Change was needed in order for the makeup artist to continue using his talents. With the help of some friends, Arrasmith opened a haunted house attraction called The Dark Path Haunt, which was ranked number one in haunted houses in Dallas Fort-Worth last year.

“It was always a dream of mine to bring high-quality Halloween attraction to Denton and I am currently focusing most of my attention on that as of now,” he said.

Arrasmith said that in the last year alone, he’s been approached by several professionals in the local Dallas film industry wanting to act and design for the haunt.

“Perhaps it can be somewhat of a haven for creative professionals until the local film industry comes back to its former glory.”