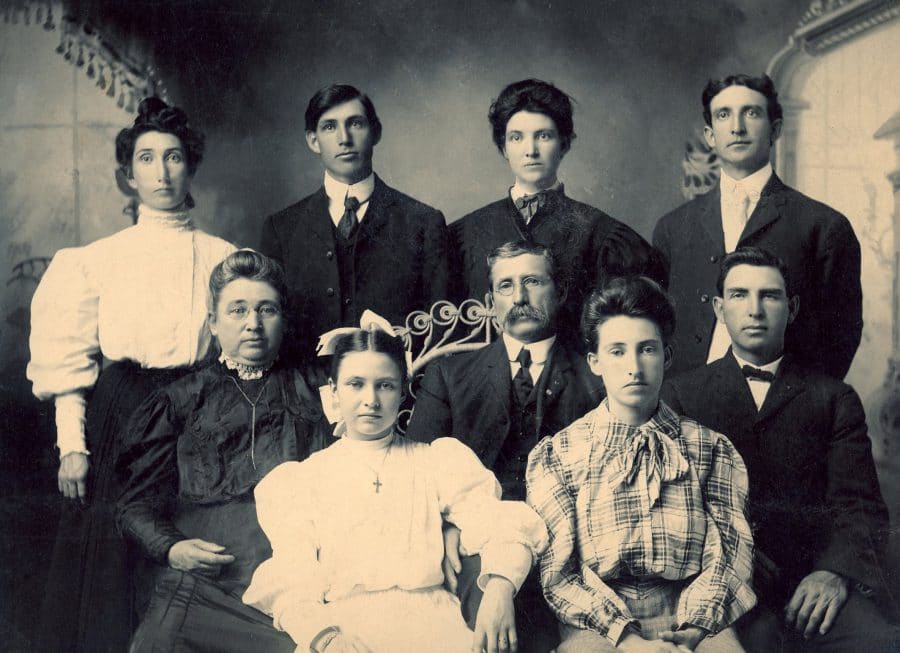 Every year at the CPN Family Reunion Festival, the Nation honors a group of families that moved to Oklahoma and eventually formed the Citizen Potawatomi Nation. The 2019 Honored Families are Johnson, Lafromboise, LaReau, LeClaire, Melott, Rhodd, Tescier, Weld and Young.

In 1844, Anthony Tescier married Catherine Bourbonnais. Through the 1833 Treaty of Chicago, Catherine and her family relocated to lands between the Mississippi and Missouri Rivers. Eventually, the family moved to Council Bluffs, Iowa, before they arrived to the new reservation in Kansas where Catherine passed away in 1860. One year later, Anthony married his first wife’s niece Elizabeth Catherine Bourbonnais. The Tescier family eventually moved to Indian Territory and established a family farm on their allotment near present-day Choctaw, Oklahoma. Although Anthony Tescier passed away in 1891, Elizabeth Catherine Tescier remained an icon of love and strength in the Tescier family until her death in 1920.

The Tescier family – referred to as the Tescier Clan in early eastern Oklahoma County – saw the country develop as few others have. They lived through the Land Run of 1889 and experienced the breakdown of the reservation into allotted farmsteads. They witnessed the birth of Oklahoma and endured both the Great Depression and the Dust Bowl. Their lives of hardship and grief, balanced by effort and perseverance, and their devotion to family remain an inspiration to the generations that follow them.

Hiram built the second ferry in Uniontown and began its operation in 1853, catering to travelers along the Oregon and California Trails. Hiram passed away in 1855, but the Weld family received an opportunity to become U.S. Citizens and plots of allotted land through the Treaty of 1861. Eventually, they left behind the prairies of the Kansas reserve to carve out a new existence for themselves and future generations along the unsettled plains of Indian Territory in the late 1890s.

Mary Anastasia Higbee and Joseph LaReau wed on July 25, 1871, in St Marys, Kansas, and they bore their seven children on the Potawatomi reserve near the St. Mary’s Mission.

As a Citizen Potawatomi, Mary Anastasia received a land allotment in Indian Territory through the Dawes Act of 1887. She and Joseph resolved to make one final journey together and carve out a home and future for their family along the plains of Indian Territory They relocated to Wanette in 1896 where they raised their children on a family farm.

Pierre LeClair – married to Cecile LeClair – was an important Potawatomi translator. John Kinzie, one of Chicago’s earliest settlers and fur trader, employed Pierre as an interpreter In this role, Pierre mediated the terms of surrender after the Battle of Fort Dearborn in 1812.

By 1832, Pierre fought alongside Chicago Potawatomi chiefs Wabaunsee, Shabbone and Bigfoot during the Black Hawk War and served as an official interpreter.

After the 1833 Treaty of Chicago, Pierre removed with the Potawatomi to Missouri. He served as the key interpreter in an 1845 delegation that traveled to Washington, D.C. to discuss the cession of the Iowa reserve to the government. He became well known for his colorful and moving speech addressed to President Polk. In his statement, Pierre referenced prior treaties between the Tribe and the United States, highlighting the promises that the government failed to uphold. He also discussed the beauty and connection the Potawatomi had to their homelands, which they ceded for little in return.

Pierre’s efforts helped make the delegation a success, and soon after, Tribal leaders moved the band to Kansas. Many of Pierre’s children emerged as leaders in Kansas and eventually Oklahoma.