Potawatomi vs. the Wild West 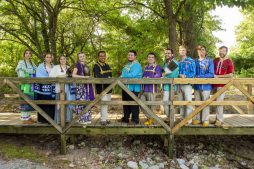 Every year, the Tribe selects 10 students from across the country for the Potawatomi Leadership Program. The PLP, recognized by the Harvard Project on American Indian Economic Development, brings together young Tribal members to learn about the Citizen Potawatomi Nation.

This year’s group traveled from as far as Vashon, Washington, and as near as Tecumseh, Oklahoma. Over the summer, they spent six weeks at Tribal headquarters learning governmental functions, cultural traditions, history, leadership skills and more.

The participants spent time researching their lineage. Andrew Hudson from Rossville, Kansas, studies industrial engineering. He knew little about his heritage aside from the fact he is a Navarre descendant. Hudson enjoyed researching his family line.

“I tracked it back from me to my grandma back many generations up until the Navarre family who were one of the original allotment owner families in the Oklahoma reservation,” he said.

Director of the Cultural Heritage Center Kelli Mosteller led them on an exhibit tour, outlining Potawatomi history and discussing the wide variety of factors that shaped their heritage. It made an impression on Maudie Loper, a recent graduate of Ardmore High School in Oklahoma.

“She was telling us a lot about how the Tribe was in the beginning versus how we are now. How we were very powerful, I guess would be one word you could use, for sure,” she said. “That was something I didn’t exactly know a lot about.” 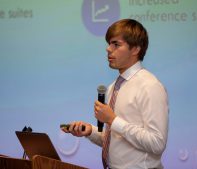 The PLP interns visited every CPN department and enterprise. They learned about a variety of Tribal programs including real estate services and the House of Hope, and the range of offerings surprised them. The number of Tribally-owned businesses varying from casinos to grocery stores impressed them as well. They witnessed the Nation’s self-reliance on a day-to-day basis.

“I knew there was a degree of self-governance, but I wasn’t really sure to what extent it was,” said Ball State University sophomore Nathan Valdez. “Knowing that we … all do our own thing, that’s pretty neat.”

During meetings with individual departments, the employees discussed their duties and upcoming projects. The interns listed the eagle aviary, community garden and realty department as a few of their favorites. As an agribusiness major at Oklahoma State University, Cade Miller enjoyed their time with the Office of Environmental Health.

“I like how, especially in our environmental sector, how we’re trying to go green and then trying to save and conserve energy,” he said. He also appreciates the attention given to plans like the Blue Zones, an attempt to increase community well-being by making healthy options easier to access.

For some of them, the PLP presented the first opportunity to live on their own and take care of themselves. It served as an essential means of honing their leadership skills apart from their assignments around the Tribe.

“I think that coming here and just being in a house with so many people has really prepared me for working with a lot of different people because we all have very different personalities,” said Cameron Kelly, a sophomore at Texas A&M University. 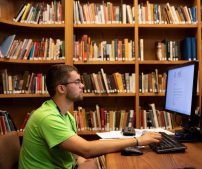 William McCurley researching his family at the CHC library.

Bellscheidt said she enhanced her communication skills through the communal living as well. Some participants practiced stepping back to allow others to speak up and express their opinion, while others made themselves come forward. Seminole State College health sciences major Brandon Jones began filling gaps in chores and attempting to accomplish things “the right way the first time.”

“I take charge on cooking every night. My favorite thing to do is cook for everybody,” he said. “Nobody really liked to cook at first, but I kind of just stepped up to the plate, and we started making meals for everybody.”

They built confidence in unique ways and prepared themselves to set their own schedules, take care of their own homes and meet the expectations they developed for themselves.

Several members of this year’s class attended the annual Family Reunion Festival for the first time. In preparation, they learned a few traditional dances for Grand Entry and the powwow. Many of them also participated in cultural ceremonies for the first time.

Those who live far away expressed gratitude for the experience, including University of Kansas freshman Gabriella Gombas. She learned about gender equality in Tribal society, in both the past and present.

“It’s a symbiotic relationship. Everyone has the same amount of work, and one cannot be without the other,” she said. “It’s beautiful, honestly.” 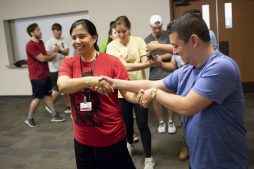 The participants also enjoyed learning the Potawatomi language, considering it a significant portion of the lifestyle. Language Department Director Justin Neely led classes a few times a week focusing on grammar, vocabulary and sentence structure. Bruno family descendant William McCurley perceived it as a way to fulfill an obligation to spread the culture.

“According to the Seventh Fire prophecy, we’re supposed to bring it back. I just think it’s neat how the Tribe is working to try to achieve that,” he said.

“I think it’s really important for us as Potawatomi to know that language as well because we’re not just U.S. citizens. We’re also Citizen Potawatomi.”

Overall, the time spent at CPN increased their confidence in all aspects of life. The immersive experience made them consider everything from making their bed in the morning to the operations of a Native American court system.

He hopes to return to CPN following college graduation as a career option. For more information on the Potawatomi Leadership Program, visit cpn.news/PLPinfo. The application period opens each February.