Potawatomi vs. the Wild West

In June, Janie Simms Hipp addressed the Sovereignty Symposium in Oklahoma City about potential policy changes. She is director of the Indigenous Food and Agriculture Initiative at the University of Arkansas School of Law. 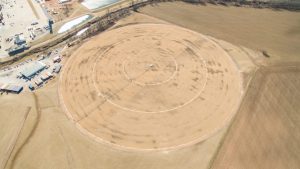 “Farm and food policy is tightly interwoven with rural development policy and hunger policy, and it has to stay that way,” Hipp said. “If it is separated, we’re all in trouble.”

Current trends indicate a push for removing the nutrition title from the farm bill. Hipp said, “If you do that, you will eviscerate the United States’ agriculture infrastructure.

While the nutrition title currently remains in both 2018 congressional versions, the House of Representatives’ language includes work requirements to receive SNAP and cuts the program’s funding.

“There’s only one program in Oklahoma which is in compliance with this requirement, and it is in Oklahoma City,” Hotvedt said. For those living outside of central Oklahoma, upholding the work stipulation to receive SNAP benefits could prove difficult.

“I think the biggest impact is going to be on our grocery stores, because they’re the (Tribal enterprise) that takes the most funding from SNAP,” said Richard Driskell, FireLake Discount Foods director.

“If they cut SNAP funding, it’s going to affect us,” he said. “It’s affected us in the past when they cut the funding as well.”

However, Hipp said if the legislation’s language does not provide assistance to both producers and consumers, tribal-based agricultural economic opportunities could fade away.

“Where we are across the country, the rural community in and around (tribes) has been struggling, and they’ve been struggling around agriculture,” Hipp said.

“Tribes invest in rural areas and create jobs benefiting Natives and non-Natives,” Hotvedt said. Oklahoma tribes provide an annual impact of more than $10 billion to the state’s economy and support 5 percent of jobs.

Abundant economic development opportunities exist for Oklahoma tribes with food and agriculture, Hipp said. “If you look at the data, almost all Indian land is used in agriculture in some way or another.

Hipp said the two main interstates running through Oklahoma, I-40 and I-35, make the state a hub for food and fiber transportation.

“Yes, we are due for a food infrastructure grand conversation, but we don’t cut the legs out from under what we have and put in something new without having the conversation first,” she said. “The unintended consequences will be significant and severe.”

Enacting the farm bill can require more steps than other pieces of legislation.

“(The farm bill) is a Swiss Army Knife, but guess what? That’s what keeps it together,” Hipp said.

Now that both floors passed their versions, a joint committee must merge the two to create one cohesive bill. Both congressional arms must approve the combined legislation, and then the President will either sign or veto it. Once passed, the general public has 30 to 90 days to comment. The USDA determines which, if any, suggestions to incorporate before deciding program administration.

The final 2018 Farm Bill’s language and potential impact on CPN and Indian Country remains unknown. Congress has until Sept. 30 to pass the legislation. If a consensus is not made by the cutline, the original 1928 legislation will go into effect.