In late summer 1838 near Twin Lakes, Indiana, U.S. General John Tipton called a meeting with the Potawatomi around Chief Menominee’s village. Menominee refused to give up what remained of his people’s land. However, the federal government claimed ownership due to prior treaties and documents signed by him and other Potawatomi representatives. Militia placed Menominee and other Tribal leaders in shackles and forced the Potawatomi to begin their 660-mile removal from the Great Lakes region to present-day Kansas on Sept. 4, 1838. The removal claimed 42 Potawatomi lives, most of which were children and elders, and became known as the Trail of Death.

Nearly 150 years later in 1988, several Citizen Potawatomi Nation members and historians planned the first Trail of Death Commemorative Caravan in remembrance of the lives lost and the removal’s impact on the Tribe. Since then, the Trail of Death Caravan happens every five years. The next caravan begins at the Fulton County Historical Society in Indiana on Sept. 17, 2018, and ends on Sept. 22 in Kansas. 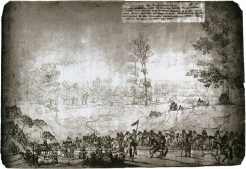 “We will begin the caravan on Monday, Sept. 17 at 7:30 a.m. at the Fulton County Historical Society,” said Tracy Locke, secretary of the Trail of Death Association.

The caravan will follow the same 660-mile path that Menominee and his people walked with stopovers in Indiana, Illinois and Missouri, culminating at Sugar Creek, Kansas, on Sept. 22.

“We will follow the trail to Sugar Creek, stopping at various camp sites to read from the diary of Father Petit,” Locke said. “You can view the full itinerary on the Potawatomi Trail of Death Association’s website.”

Benjamin Petit was a Roman Catholic priest who kept a daily written account along the Trail of Death.

“Although I will not be attending the caravan this year, I have traveled the route to Sugar Creek with family members,” Locke said. “While at Sugar Creek, we took some time to pray and reflect on what our ancestors endured. It was a very emotional time for all of us.”

Locke is one of only four people on the caravan’s planning committee. Her fourth great-grandfather Abram Burnett served as the interpreter on the Trail of Death. She said her family connections inspire her to help with the efforts.

Before the Trail of Death Commemorative Caravan begins, the Fulton County Historical Society in Rochester, Indiana, will hold its annual Trail of Courage Festival on Sept. 15 – 16, 2018.

“They have booths set up, and they honor a Potawatomi every year that had an ancestor on the trail,” she said.

Since beginning the caravan, Citizen Potawatomi Nation member and Trail of Death Association President George Godfrey and Fulton County Historian Shirley Willard have positioned plaques every 15 to 20 miles along the trail, and the association is currently working to set more.

“Most of the markers are placed approximate to the encampments mentioned in Jesse Douglas’ 1938 removal journal,” Godfrey said. “In a few instances, placement is a compromise between readability and security. Most of them are on public lands. Boy Scouts, Girl Scouts, families, individuals, Potawatomi bands and historical societies have posted the markers. No government funds ever have been used.”

Godfrey is a descendant of the Bergeron family, and through his efforts, he hopes more understand the historical importance and significance of the Trail of Death.

“I have the responsibility of seeing that the caravan goes as smoothly as possible,” he said. “I trust the many people who have volunteered to organize the caravan. Their efforts make my role easy.”

The planning committee reserved blocks of hotel rooms along the trek.

“The rooms are between $100 and $120 a night, and we’re looking at five nights,” Locke said. “And of course, they’re not obligated to stay in those particular hotels. People are welcome to stay where they want.”

Drop-in followers are also encouraged to join at any point along the trail.

Locke said those unable to participate in the caravan can still have a spiritual experience by traveling the trail on their own time.

In order to get the full experience, Godfrey recommends the Trail of Death map information from the association.

“An interested person walking or driving the Trail of Death may want to rely on directions available through the Potawatomi Trail of Death Association,” he said.

Sign up for the 2018 Trail of Death Caravan by visiting potawatomi-tda.org, and stay up to date by joining the Potawatomi Trail of Death 2018 Caravan Facebook group. Please note, to participate in the caravan, there is a $30 fee per person, which covers the Trail of Death Association’s expenses.