Heather Gaston has a heart for service

The Oklahoma Tribal Financial Consortium came from a simple idea created by multiple tribal finance directors and the sheer willpower of the organization’s president, founder and CEO Victor Flores. The Absentee Shawnee Tribe frequently sent him out of state to attend workshops during his first year as its chief financial officer because few educational opportunities existed in Oklahoma.

Flores often attended conferences with his colleagues and counterparts, including Citizen Potawatomi Nation’s Chief Financial Officer Susan Blair. Many of them worked for the 38 federally recognized tribes headquartered in Oklahoma, and he questioned traveling throughout the United States. He proposed hosting a group meeting in state. Everyone liked the idea, but doubted it would come to fruition. 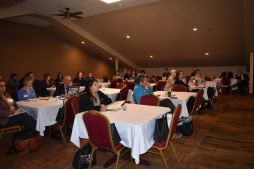 Financial leaders from tribes across the state gather at CPN’s FireLake Golf Course in January 2018 for the first quarterly meeting of the Oklahoma Tribal Financial Consortium.

Flores worked quickly, and, in a few months, organized the inaugural meeting in October 2017 — the first of its kind in the state. Blair volunteered CPN to host the first quarterly gathering at FireLake Golf Course in January 2018.

“I think the consortium is a good idea because it gets all of the Oklahoma tribes together to discuss their unique issues,” Blair said. “Plus, it’s very good for meeting people andmaking connections.”

Attendees include tribal employees with financial decision-making power. They discuss Native American national development from several angles, while considering the intricacies of tribal governments and corporations. Both Flores and Blair find economic diversity is often overlooked.

Upon accepting his position as CFO for the Absentee Shawnee, Flores said, “‘Surely, tribal finance cannot be that much different.’ I was very wrong.”

It encompasses self-governance, health, grant application, gaming and banking, and much more. His background in corporate finance left the breadth of knowledge he needed unfilled. Flores founded the consortium to simplify that kind of training across tribes. Since its inception, the group made a point of accessibility.

“Folks come when they can. I made sure these meetings are free so that there is no barrier for people to attend,” Flores said. “These meetings happen throughout the state. In January, we’re going to be down south, and then we’re going to have a meeting over there in the northeast area as well. And I know it’s a lofty goal to have every single tribal nation represented at our meetings.”

The Oklahoma Tribal Financial Consortium focuses on collaboration as a means of growth. Sharing knowledge and experiences results in better financial decisions based around a particular nation’s nuances. The distribution of contact information opened the lines of communication to ask for advice, exchange ideas and discuss educational possibilities.

“We have an opportunity for our tribal nations in our state to come together and to have a powerful impact together,” Flores said. “We could continue doing great work individually, but we could do greater work if we come together on things. And that’s been proven time and time again.”

CPN employees represent the Nation at each meeting to discuss specific tasks or topics. This month, the Absentee Shawnee Tribe hosts the organization’s fifth conference at the University of Oklahoma College of Law in Norman, focusing on economic development and government contracting as well as current legal issues in tribal finance.

“CPN needs to continue to participate,” Blair said. “We are one of the larger tribes. We need to be there and help it grow, whatever we can do.”

The consortium in collaboration with Oklahoma State University created the OSU Introductory Tribal Finance and Accounting Institute Certificate Program — three-and-a-half days of seminars designed to fill in attendees’ knowledge gaps on the basics. The sessions begin in May 2019, and two CPN employees said they look forward to participating. In a recent interview, CPN Assistant Director of Finance Mary Chisholm described what she anticipates to take away from the classes, including a deeper understanding of the Tribe’s functions and a chance to meet colleagues.

“I think the more you are around people that are doing the same or similar things, you can grow that connection,” she said. “Maybe even getting some new ideas that we can bring back here to utilize. That’d be fantastic.”

Flores also hopes to get more tribes to participate in the Native American Economic Impact Study. This particular survey of how the 38 federally recognized tribes contribution to the Oklahoma economy last came out in 2012. It analyzed fiscal year 2011, and no more than eight tribes out of 38 participated.

The OTFC encourages them to submit data on their impact on the surrounding community. The consortium plans to release the next one in 2019. In preparation, it is hosting roundtable discussions throughout the year and answering tribal leaders’ questions.

“We need to get the real truth out there. The economic impact study will be a great first step,” Flores said. “It’s going to help our conversations with our county commissioners, our city mayors in our area, and specifically, with our state legislators.”

Besides educating themselves on tribal finance, the organization prioritizes developing a financial literacy program for Native Americans. The program focuses on three different age ranges and their specific needs: tribal youth, working adults and elders.

“I know that we’re all doing great things, and we all have success stories, but we have to think even larger,” Flores said. “We have to focus on the group, the greater group, which is every single Native American that resides in Oklahoma.”

For more about the Oklahoma Tribal Financial Consortium, visit oktribalfinance.com.